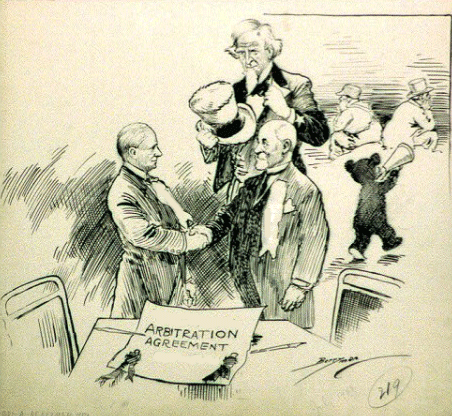 Last week, in Salome Samaniego, et. al. v. Empire Today, LLC (May 2012), the California Court of Appeals refused to enforce an arbitration clause in the context of wage and hour litigation on the grounds that the  arbitration provision was procedurally and substantively unconscionable.  This post-Concepcion decision once again reinforced a general rule that arbitration agreements, just like all other contract provisions, remain subject to the unconscionability analysis.

Plaintiffs worked as carpet installers for Flooring Install, Inc., an alleged subsidiary of Empire Today, Inc.  When they were initially hired, they were given form contracts and told to sign them if they wanted to work for Empire. When carpet installers filed a class action challenging Empire’s allegedly unlawful misclassification of its carpet installers as independent contractors, Empire moved to stay the action and compel arbitration pursuant to the Agreement.

“Any dispute or claim arising from any provision of this Agreement or relating in any way to the business relationship between Flooring Install and the Subcontractor shall be submitted to arbitration before a single arbitrator pursuant to the Commercial Arbitration Rules of the American Arbitration Association. . . .

Both Flooring Install and the Subcontractor are hereby agreeing to choose arbitration, rather than litigation or some other means of dispute resolution, to address their grievances or alleged grievances with the expectation that this resolution process may be more cost-effective and expedient for the parties than litigation. By entering into this Agreement and the arbitration provisions of this section, both parties are giving up their constitutional right to have any dispute decided in a court of law before a jury and, instead, are accepting the use of arbitration, other than as set forth immediately below.

DUE TO THE POSSIBLE IMMEDIATE AND IRREPARABLE NATURE OF THE HARM, THE PARTIES AGREE THAT THIS SECTION SHALL NOT APPLY TO ANY CLAIMS BROUGHT BY ANY PARTY FOR DECLARATORY OR PRELIMINARY INJUNCTIVE RELIEF INVOLVING [specified sections] OF THIS AGREEMENT.”

The trial court found the Agreement was “highly unconscionable from a procedural standpoint” and demonstrated “strong indicia of substantive unconscionability,” and therefore denied Empire’s motion to compel. Empire appealed.

The Court of Appeals affirmed the trial court’s decision, holding that the arbitration provision was  unconscionable and unenforceable under Armendariz v. Foundation Health Psychare Services, Inc. (2000) 24 Cal.4th 83 (Armendariz); that the consideration of the issues was governed by California law; and that the recent decision of the Supreme Court of the United States in AT&T Mobility LLC v. Concepcion (2011) does not change the analysis.

In reviewing the enforceability of Empire’s arbitration provision the court emphasized the following findings as indications of procedural  and substantive unconscionability:

In light of Samaniego and other post-Conception decisions, employers must be aware that not every arbitration agreement will be enforced. Certain procedural and substantive pitfalls will render the agreement to arbitrate unconscionable.