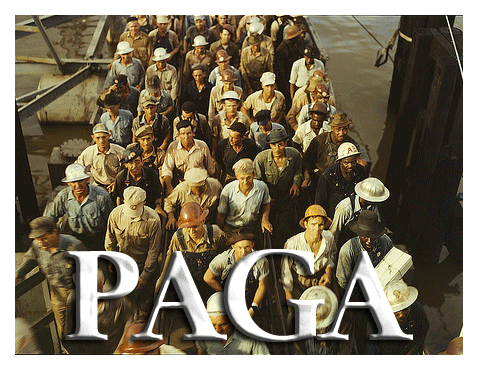 Under California law, the Labor and Workforce Development Agency (LWDA) is authorized to collect civil penalties for specified labor law violations committed by employers. However, in the past few decades, California enforcement agencies had declined and were unlikely to keep pace with the future growth of the labor market.  To improve the enforcement of the labor laws, in 2003, the California Legislature enacted Labor Code sections 2698 et. seq, which are known as Private Attorney General Act (“PAGA”). Under the PAGA, aggrieved employees can step into the shoes of the enforcement agency, acting as Private Attorney General, and  file a lawsuit to recover civil penalties for Labor Code violations in the public interest. Collecting civil penalties under the PAGA benefits both the LWDA and employees, because 75% of the recovered penalties go to the state and 25% – to the employee who brought a PAGA claim.

Because the PAGA is a relatively new piece of legislation, certain provisions remain unsettled, causing uncertainty for employers and stirring up a fair amount of litigation. In a recent decision, Thurman v Bayshore Transit Management, Inc., the California Court of Appeals addressed some of the issues regarding sections 2698 et. seq.

In January 2004, Amalgamated Transit Union, filed a representative action on behalf of its member bus drivers alleging that the various defendant employers had violated provisions of the Labor Code that require employers to provide meal and rest periods for their employees. After a bench trial, the trial court entered a judgment imposing, among other things, civil penalties, including unpaid wages, in the total amount of $358,588.22, against defendants under the PAGA.  The following are some of the most important holdings:

An employee argued that the trial court committed reversible error in denying him recovery of civil penalties under both section 558, and wage order No. 9-2001. The court disagreed with the plaintiff’s argument explaining that absent statutory authorization, there is no right of action under the PAGA to enforce an Industrial Welfare Commission (IWC) wage order. The PAGA authorizes recovery of civil penalties only for violations of the Labor Code.  Only the Legislature, through enactment of a statute, can create a private right of action to directly enforce an administrative regulation, such as a wage order. A wage order is not a statute.

However, the court recognized that PAGA actions can serve to indirectly enforce certain wage order provisions by enforcing statutes that require compliance with wage orders (e.g., § 1198, which prohibits longer work hours than those fixed by wage order or employment under conditions prohibited by a wage order)

Employee May not Recover Civil Penalties Under both Section 558 and Wage Order No. 9 section 20.

Section 2699, subdivision (e)(2)  provides that “[i]n any action by an aggrieved employee seeking recovery of a civil penalty, a court may award a lesser amount than the maximum penalty amount specified by this part if, based on the facts and circumstances of the particular case, to do otherwise would result in an award that is unjust, arbitrary, oppressive, or confiscatory.”

In this case, the Court of Appeals found that the trial court did not abuse its discretion in reducing the civil penalties by 30 percent because the evidence showed “between 2003 and 200 defendants took their obligations under Wage Order No. 9 seriously and attempted to comply with the law.”

Employee May Recover Unpaid Wages Under Section 558 as a Civil Penalty.

Section 558 states that any employer or other person acting on behalf of an employer who violates  any provision regulating hours and days of work in any order of the Industrial Welfare Commission shall be subject to a civil penalty as follows:  (1)  $50 for initial violation, (2) $100 for each subsequent violation, and plus (3) wages recovered pursuant to this section shall be paid to the affected employee.

Defendants argued  that the trial court erred in awarding unpaid wages as a part of the civil penalty provided for in section 558. The Court of Appeals disagreed and held that the entire remedy provided by section 558, including the recovery of underpaid wages, is a civil penalty, as noted by the California Supreme Court in Reynolds and by the Courts of Appeal in Jones and Bradstreet. In Reynolds, the California Supreme Court held that corporate agents such as officers and directors cannot be held liable as “employers” in an action under section 1194 for unpaid overtime wages. However, the Court noted  that “pursuant to section 558, subdivision (a), a person “acting on behalf of an employer”  could be subject to penalties equal to the amount of unpaid wages, and that section 2699, subdivision (a) authorizes employees in some circumstance[s] to bring civil actions to collect these penalties.”  These statements show that the Supreme Court viewed the recovery of underpaid wages under section 558, subdivision (a) as being part of, rather than in addition to, the civil penalty provided by that subdivision.

This is an important holding for employees, because it provides them with an additional weapon to hold corporate agents (e.g. officers and directors) personally liable for wages owed to workers.

As stated above, the civil penalty under section 558 applies to “any provision regulating hours and days of work in any order” of the IWC. Defendants contended that the trial court erred in allowing the employee to recover PAGA penalties under section 558 for missed rest periods because the statute does not provide a penalty for missed rest periods. The court disagreed explaining “[S]tatutes governing conditions of employment are to be construed broadly in favor of protecting employees”. The court further noted that the fact that the Legislature in section 516 authorized the IWC to “adopt or amend working condition orders with respect to break periods” is a strong indication that it intended that violations of such orders be subject to the civil penalty provided by section 558, which is in the same chapter as section 516.

Unless the holdings are reviewed by the California Supreme Court, Thurman v. Bayshore Transit Management, Inc is a troublesome decision for California employers defending PAGA claims.

First, by holding that employees may recover unpaid wages under civil penalties, the decision gives an additional mechanism for employees to go after corporate officers and managing shareholders for unpaid wages. Therefore, human resources and corporate officers acting on behalf of corporation must be extremely careful when dealing with wage and hour issues. As to Plaintiffs’ attorneys, while drafting complaints, they are recommended to include a PAGA claim and ask for recovery of unpaid wages under Labor Code section 558 (especially, when the defendant is an insolvent corporation).

Second, by holding that employees may recover unpaid premiums for missed meal and rest periods under the PAGA, the decision creates a strategic tool for plaintiffs’ attorneys to pursue meal and rest period claims under Labor Code section 558 without fear of being liable for attorney’s fees to prevailing defendant under section 218.5.

Third, the employers facing civil penalties under the PAGA should always ask the court to reduce the PAGA award where they are able to demonstrate good faith attempts to comply with wage and hour laws.