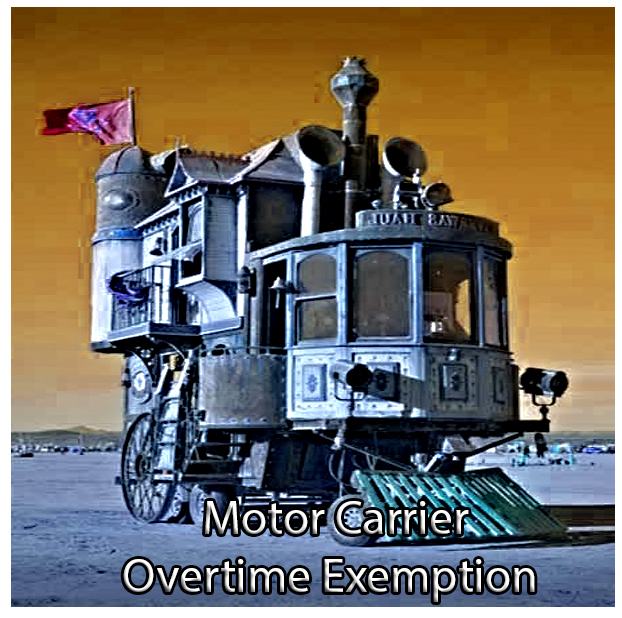 In one of the previous posts, we discussed how some commercial bus drivers may be exempt from California overtime laws under Industrial Welfare Commission Wage Order No. 9 section 3(L). It is crucial to keep in mind that in addition to state law, hours and days of work of commercial bus drivers are also regulated by federal law, namely, the Federal Standard Labor Act of 1938 (“FLSA”.) The FLSA, among other things, establishes a premium or penalty rate for all work above 40 hours per week for all covered employees, unless specific exemption is provided. Therefore, commercial bus drivers engaged exclusively in intrastate commerce may be entitled to overtime compensation under the federal overtime provision if their employers are covered by the FLSA.

The language of the Motor Carrier Act exemption is contained in 29 U.S.C. § 213(b)(1) and reads that the FLSA’s overtime provisions (section 207) shall not apply to  any employee with respect to whom the Secretary of Transportation has power to establish qualifications and maximum hours of service pursuant to the provisions of section 31502 of title 49. Under section 31502, the Secretary of Transportation may prescribe requirements for:

(1)   qualifications and maximum hours of service of employees of, and safety of operation and equipment of, a motor carrier; and

(2)    qualifications and maximum hours of service of employees of, and standards of equipment of, a motor private carrier, when needed to promote safety of operation.

What it means is that any driver who falls under the jurisdiction of the Department of Transportation (“DOT”) will be exempt from the FLSA’s overtime requirements. The next logical question is under what circumstances a driver falls under the DOT’s jurisdiction. The answer is that the DOT’s jurisdiction extends to all employees whose activities affect the safety of operation of interstate motor vehicles. Consequently, any driver who provides services in interstate commerce is exempt from federal overtime laws. Generally, the MCA Exemption also applies to the following classes of motor carrier employees:

2. Drivers’ helpers on such vehicles;

4. Loaders of such vehicles

Effect of the SAFETEA-LU on the MCA Exemption

In 2005, after Congress passed the Safe, Accountable, Flexible, Efficient Transportation Equity Act: A Legacy for Users (SAFETEA-LU), the MCA Exemption and its coverage was effectively narrowed to exclude certain unqualified vehicles.

b)         is designed or used to transport more than 8 passengers (including the driver) for compensation;

In essence, as a result of the SAFETEA-LU, drivers who do not operate “commercial” vehicles are now entitled to overtime compensation under the FLSA. Therefore, on May 23, 2007, the Department of Labor, Wage and Hour Administrator, Paul DeCamp, issued a Field Assistance Bulletin, No. 2007-2, addressed to Regional Administrators and District Directors, advising his staff that “employees engaged in transportation via vehicles such as most light pick-up trucks and automobiles, who historically had been covered by the FLSA § 13(b)(1) exemption from overtime, are no longer exempt.”

Drivers must be involved in interstate commerce to qualify for the MCA exemption.

As stated above, only those drivers whose activities affect the safety of operation of interstate “commercial” motor vehicles are exempt from the FLSA’s overtime requirements. In short, the DOT does not have automatic jurisdiction over all drivers of an interstate carrier. Its jurisdiction extends only to drivers who reasonably could be expected to make one of the carrier’s interstate runs, and that means more than a remote possibility. Reich v. American Driver Service, Inc., 33 F.3d 1153, 1156 (9th Cir.1994).

In determining whether an employee’s activities would be part of interstate commerce for purposes of the FLSA, courts are usually guided by practical considerations. Marshall v. Victoria Transp. Co., Inc., 603 F.2d 1122, 1123 (5th Cir.1979) As a result, even purely intrastate transportation can constitute part of interstate commerce if it is part of a “continuous stream of interstate travel.” As long as the employer can show a “practical continuity of movement” between the intrastate segment and the overall interstate flow, its drivers will be covered by the MCA exemption. Chao v. First Class Coach Co., Inc., 214 F.Supp.2d. 1263, 1272 (M.D.Fla.2001)

For example, in United States v. Capital Transit Co., 338 U.S. 286 (1949), the Supreme Court held that a bus service that drove routes within the District of Columbia that took commuters to locations where they then could board buses bound for Virginia was involved in interstate commerce.

Exceptions to the MCA exemption

49 U.S.C. §13506 set forth a number of exceptions applicable to specific drivers over whom the DOT has no jurisdiction. While there is a judicial split as to the extent of  this regulatory exclusion, it may be argued that  these drivers are not covered by the MCA and are entitled to overtime under the FLSA. The following are  some examples of  the excluded vehicle categories:

In determining whether an exemption exists, the burden is on the employer to prove the applicability of all exemptions. All exemptions are subject to a rule of strict construction and any doubt is ruled in favor of the employee.

As you can see the MCA exemption and its applicability are highly complex matters that require a careful evaluation of all facts by an employment law professional. If you have questions regarding this post or other employment law related issues, feel free to contact one of our employment law attorneys, located in San Francisco, California.