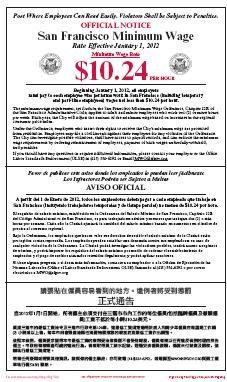 According to the San Francisco Minimum Wage Ordinance, starting January 1, 2012, all employees performing work in the county of San Francisco must be paid not less than $10.24 per hour.  San Francisco is the first city in the United Stated with a minimum wage rate above $10. This increase is a result of a proposition passed by the city’s residents in 2003. The Proposition requires the city to increase its minimum wage rate every year based on the formula reflecting the cost of living and inflation.

Even though the Ordinance covers only San Francisco, employers located outside must be on alert as well. The ordinance does not care where the employer’s principle place of business is situated, as long as employees perform the work within the boundaries of San Francisco County, they must be paid at least $10.24 an hour.

In addition, the Ordinance also protects illegal immigrants.  The City’s Office of Labor Standards Enforcement will investigate and adjudicate every wage claim on behalf of the aggrieved worker without regard to an immigrant status. The City’s site clearly states that “workers filing a claim with City will not be questioned about their immigration status.”

The ordinance also requires every employer to post in a conspicuous place at job site the notice published by the Agency informing workers of the latest minimum wage rate. The notice must be in English, Spanish, Chinese and any other language spoken by at least five percent of the employees at the workplace.