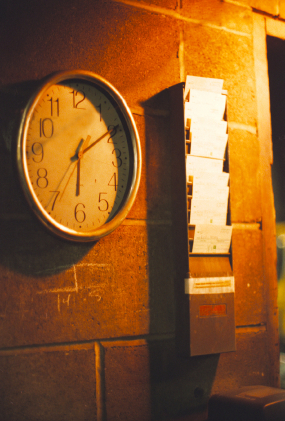 In its recent opinion Aleman (Michael) v. Airtouch Cellular, (Cal. 2012), (Cal. 2012), the California Court of Appeals examined the application of two important provisions from the Industrial Welfare Commission‘s Wage Order No. 4-2001 (Cal. Code Regs., tit. 8, § 11040): (1) reporting time compensation and (2) split shift premiums. Both provisions have been subjects of much litigation in the past few years. The issues were framed as follows:

1)      Whether an employee is entitled to receive reporting time pay for attending meetings at work, when such meetings were scheduled and the employee worked at least half the scheduled time?

2)      Whether an employee is owed additional compensation for working split shifts, where on each occasion that the employee worked a split shift, he earned more than the minimum amount required by the wage order?

The court ruled “NO” on  both questions. This matter was transferred by the California Supreme Court to the Court of Appeal, Second District, Division Two, for reconsideration in light of Kirby v. Immoos Fire Protection, Inc. 53 Cal.4th 1244 (2012).

1. Reporting Time Pay is Warranted only if the employee works less than half of his scheduled time.

Two members of a putative class claimed that AirTouch improperly failed to pay reporting time pay for days when employees were required to report to work just to attend work related meetings.

Under the IWC’s Wage Order 4-2001,  “reporting time pay” is defined in the following manner: each workday an employee is required to report for work and does report, but is not put to work or is furnished less than half said employee‘s usual or scheduled day‘s work, the employee shall be paid for half the usual or scheduled day‘s work, but in no event for less than two (2) hours nor more than four (4) hours, at the employee‘s regular rate of pay, which shall not be less than the minimum wage. (Cal. Code Regs., tit. 8, § 11040, subd. 5(A).)

Plaintiffs contended that in no event shall an employer pay an employee for less than two hours of work when the employee is required to report to work.

The court framed the issue as follows:  If an employee‘s only scheduled work for the day is a mandatory meeting of one and a half hours, and the employee works a total of one hour because the meeting ends a half hour early, is the employer required to pay reporting time pay pursuant to subdivision 5(A) of Wage Order 4 in addition to the one hour of wages?

2. No split shift compensation when the employee earns at least minimum wage for all hours worked plus one hour.

Plaintiffs also contended they were owed split shift compensation for days on which they attended a meeting in the morning and worked another shift later the same day.

Subdivision 4(C) of Wage Order 4 defines split shift as  a work schedule, which is interrupted by non-paid non-working periods established by the employer, other than bona fide rest or meal periods.‖ (Cal. Code Regs., tit. 8, § 11040, subd. 2(Q).) When an employee works a split shift, one (1) hour‘s pay at the minimum wage shall be paid in addition to the minimum wage for that workday, except when the employee resides at the place of employment. (Cal. Code Regs., tit. 8, § 11040, subd. 4(C).)

It was undisputed that there were five occasions during which one of the plaintiffs worked a short shift in the morning followed by a longer shift later the same day. Each of these occasions fell under Wage Order 4‘s definition of split shift. The court found that additional compensation was not owed because every time the plaintiff worked a split shift, he was paid a total amount greater than the minimum wage for all hours worked plus one additional hour.

It is interesting to note that in its analysis the Court referred to a well-respected treatise (Chin et al., Cal. Practice Guide: Employment Litigation (The Rutter Group 2011)). The court noted that the treatise has embraced the same interpretation of subdivision 4(C), explaining that “[a]n employee earning the minimum wage who works eight hours on a split shift is entitled to receive nine times the minimum hourly wage.‖ (Id. at ¶ 11:682, p. 11-68.) This provision also applies to employees paid more than the minimum wage. However, such employees are only entitled to the difference between what they actually earned and what they would have earned had they been paid the minimum wage for their entire shift plus an extra hour.‖ (Id. at ¶ 11:683, p. 11-69.)

1. Only a prevailing plaintiff is entitled to attorney fees in a dispute for split shift compensation (1194).

The court explained that a split shift claim is not the same as a claim for rest or meal period violations. Wage Order 4 explicitly excludes rest and meal periods from the definition of split shift. See Cal. Code Regs., tit. 8, § 11040, subd. 2(Q) (split shift is a work schedule, which is interrupted by non-paid non-working periods established by the employer, other than bona fide rest or meal periods.) Furthermore, unlike a claim for rest or meal period violations, a split shift claim is one brought to recover unpaid minimum wage compensation—one hour‘s pay ―at the minimum wage . . . in addition to the minimum wage for that workday. (The provision is located in the Minimum Wages‖ section of Wage Order 4. (See People v. Superior Court (Laff) (2001) 25 Cal.4th 703, 728 chapter and section headings are entitled to considerable weight in interpreting statutory language].)

2. A claim for unpaid reporting time is subject to Labor Code section 218.5.